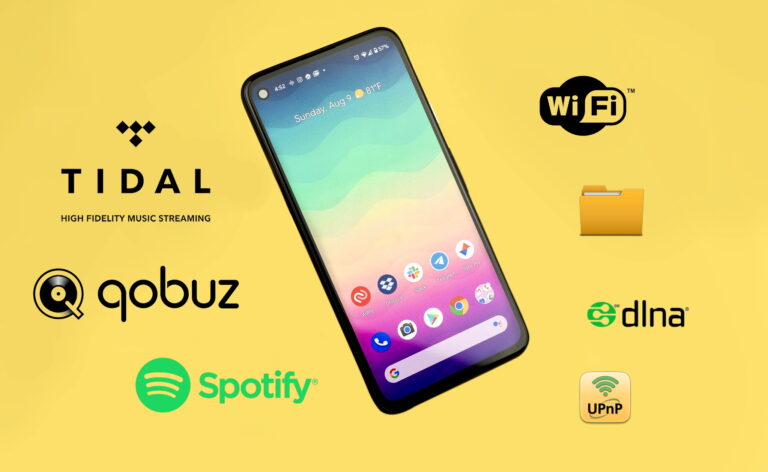 Who hasn’t the dream of having a Hi-Fi music streamer on the desk attached with their speakers? I know many of us or I can say, most of us have that dream. Products like Bluesound Node 2i, Sonos Connect, Pro-Ject Pre Box S2 Digital, etc. are some best-selling streamers in the market. Those devices are feature-packed but also have higher prices. So buyers, who don’t want to spend too much on music streamers have only a few options left. I have made another post for ‘Best Budget Hi-fi Music Streamers’ too previously for them. Most of the budget streamers have been created keeping Raspberry Pi in the center. Raspberry Pi music streamer may cost less but need a lot of tweaks, which is not everyone’s cup of tea. So today I will tell you, how to turn your old Smartphone into a hi-fi music streamer without spending anything extra.

Here are few things which are needed to turn your old Smartphone into a hi-fi music streamer. Please note that phones vary from brand to brand so my entire setup process may not be the same as yours, but everything will be as close as possible.

You first going to need an old Smartphone. Nowadays brands releasing a new phone every day and people rushing to buy that new phone. At end of the day, you may have a secondary phone which is completely fine but lying around the desk collecting dust. We are using that old phone as an excellent wireless hi-fi music streamer today. In this project, we need two Smartphones actually, the old one you not using anymore and the new one you just have bought.

In this project, we need only Android Smartphones. The specifications of your old phone don’t matter that much. Any phone with at least 2GB ram, 16 ROM, a good battery life, type c input (Micro USB works too), working touch display, and working Wi-Fi is required. That old phone should have running Android 8+ and having wireless charging is an extra benefit. I am using my 2-year-old 99$ Realme C2 as my old phone, and please avoid Oneplus phones for their poor external DAC support.

I know we all have Wi-Fi routers in our home. In this project, we need that because wireless streaming not going to possible without a router. I am using a basic 150 Mbps TP-Link router in my home for a wireless internet connection. Just connect both the phones (Old phone and New phone) to the same home Wi-Fi network via this router. That’s it.

Now as we talking about Hi-Fi music streaming, a DAC or DAC AMP combo should be in the chain. You have to connect the DAC through the old phone’s micro USB /Type C port using an OTG cable. Make sure your old phone has OTG support. Try to use a DAC or DAC AMP that has separate power input so that it doesn’t suck power from your old phone’s battery. I am using Khadas Tone 2 pro and it has two separate inputs, one for USB and another for power. Now as the DAC is constantly connected with the phone’s type C / Micro USB port a separate Y splitter cable or wireless charging is super useful. Or you can detach the DAC and charge the phone when you not playing anything.

For this project, I have used a very good android app called BubbleUPnP. If you want to know what is UPnP and how it works then read it. BubbleUPnP can be downloaded from the Google Play store without any charges but it has a paid version too. It’s upon you, for this project paid version is not required or you can buy one license and it will work on 5 devices.  Now you have to install BubbleUPnP on both Smartphones. The old phone which is now going to work as a music streamer, uninstall as many old apps as possible. Also, keep it in Airplane mode with Wi-Fi enabled. Now your setup should look like this.

Once both the phones are connected via the same Wi-Fi network and running BubbleUPnP, only some app settings are needed to be changed. Here are the settings to turn the old Smartphone into a hi-fi music streamer.

These are the following settings you have to change in BubbleUPnP.

Now change the settings of BubbleUPnP in your new phone, which you going to use as a remote.

How to Start Streaming

Keep the old phone connected to the DAC and open the BubbleUPnP app in it and let it on the desk. Now you don’t have to touch it anymore.

Again open the BubbleUPnP app on your new phone and, once you in the ‘Now playing’ screen, tap on the wireless devices option on the right. Here you can see the device ‘Old Phone Streamer. Select it and tap on the three dots of the old phone streamer device and tap on the ‘settings. In the settings, tap on the ‘FFmpeg Audio decoding’ and select ‘Never Use’.

Now go back to the ‘Now playing’ screen’ and tap on the ‘More’ option. Tap on the ‘Library’ option and select the ‘Local and Cloud’.

Now come back to the ‘Now playing’ screen and select the song you want to play either from your phone’s storage or services like Tidal and Qobuz.

Now you have a hi-fi music streamer with a touch screen, Wi-Fi, & Bluetooth by which you can stream offline music and music from services like Tidal and Qobuz. The mentioned settings could be a bit confusing so take your time and follow the steps one by one. There is much other option in the BubbleUPnP app which I have not covered here to make the article simple which you can explore as per your requirements. So this is my guide for how to turn your old Smartphone into a hi-fi music streamer, if you know any other simpler way do share in the comments too.