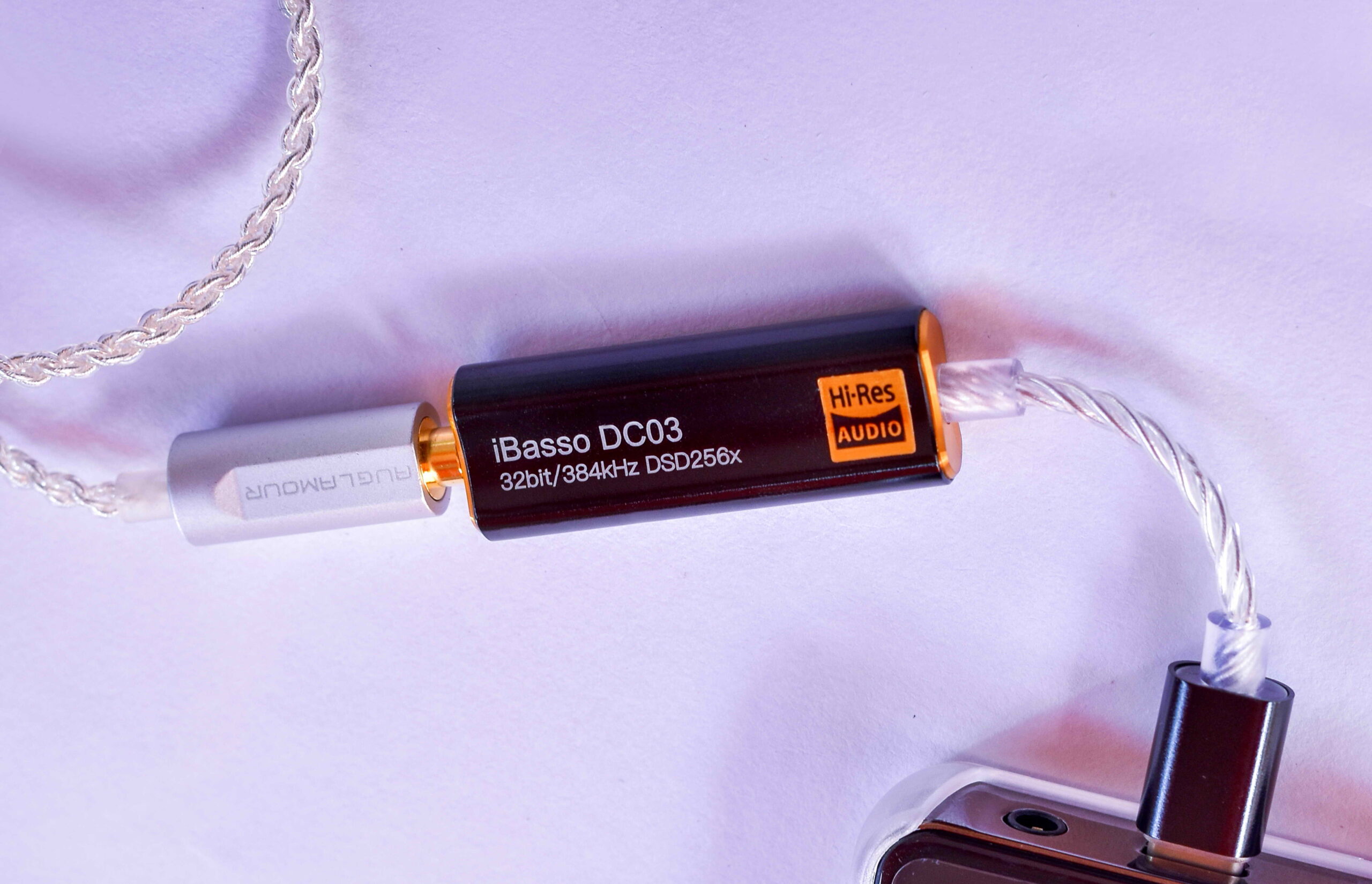 iBasso DC01 was the first device that sensationalized the USB dongle DAC market in mid-2019; and later on, iBasso also had released DC02 with 3.5 mm out. Both DC01 and D02 had dedicated and powerful AKM DAC chips under the shell for amazing sound. Following the trend, almost every brand has released their versions of ultra-portable Type-C USB DACs. Even the Year 2020 was flooded with such products from the 10$-200$ price range and different brands, but after DC01 and DC02 there was no development from iBasso in this product category. Although recently iBasso has announced two successors in the DC series, i.e. iBasso DC03, and DC04.

DC03 is the updated model of iBasso DC02 as the old DC02 has been discontinued officially. I had tried previous models of the DC series so wanted to buy a new DC03 from iBasso’s Indian retailer too but no luck. Thankfully iBasso DC03 was available in Penon Audio, so ordered it from there. Please note that I have purchased the unit spending my cash, and didn’t receive any discount/ compensation from iBasso in exchange for this review.

What’s in the Box?

Design and build quality are good. Like its name, DC03 still following the same design principles of the old iBasso DC02 but as an upgraded model there are some changes too. Firstly; Instead of a flat shell, DC03 has curves on both sides of the shell, and secondly instead of an anodized matt finish DC03 comes with either shiny silver or black finish. I like the black color so bought the black one. Other than these two changes iBasso DC03 looks similar to DC02. This time black color in combination with golden front and back panels and SPC cable looking extremely good.

iBasso DC03 also has a status indicator light near the 3.5mm port. It lights up Blue after plugging and remains static after on, so now you don’t have to get confused about either your DC03 is working or not.

DC03 weighs only 8 grams but and feels solid in hand still being so lightweight. After using it for at least 1 month, I can say the build quality is no doubt good. I was a bit worried about the black paint first but no, the paint is tough and not going to chip easily.

iBasso DC03 doesn’t need any driver or specific settings to work with Android and IOS devices (with Type-C port). But for Windows OS, ibasso has a dedicated driver which you can install to enjoy the ASIO drivers in programs like Foobar2000.

iBasso DC03 supports user flashable firmware upgrades. Recently they have released a firmware (v 1.0) where they fixed the phase rollover problem. DC03 also doesn’t have a standby feature, as soon as you connect it with your device it starts drawing power from the source.

The output power of iBasso DC03 is 1.6V @ 32 Ω and 2Vrms @300Ω load, which is high and suitable for IEMs and not so demanding headphones. DC03 can easily handle 150-200 Ω headphones too. Almost zero background noise while using moderately sensitive IEMs. In comparison with old DC02 (0.97 V), ibasso DC03 can push more power @ 32 Ω. So DC03 is more powerful too than its old brother.

iBasso DC03 draws very little power from source devices. In idle mode, it consumes less than 100 mill watts and while working (with 32Ω load) consumes less than 250 mill watts. There was a big heating issue in iBasso’s old DC01 and DC02 but DC03 doesn’t heat up too much in constant usage.

iBasso DC03 supports internal hardware volume control via applications like USB audio player pro and iBasso UAC. But don’t use both the apps simultaneously because they are creating conflict with each other. Sadly DC03 doesn’t have a Mic and in-line control support.

Before proceeding to the sound analysis part, one thing needs to be discussed first. The choice of DAC chip in iBasso’s old DC series of DAC was AKM. But this time they shifted from AKM to Cirrus Logic. We all know the fire incident in the AKM factory but as DC03 and DC04 came before that incident, we can say that iBasso shifted from AKM to Cirrus Logic for other reasons.

AKM chips are no doubt very powerful and capable, but Cirrus Logic’s new chips are not behind too. This is not the first time I am using devices with Cirrus Logic chips so I know how far these chips can go. The good thing is iBasso has used 2 chips instead of one. For balanced output in DC04, the usages of two chips are justified but in DC03 the same two DAC chip combination is there too.

I could have easily called DC03’s overall sound neutral; but due to its little extra emphasis on the lower frequency part, I am calling it a balanced sounding DAC. iBasso DC03 can produce a good amount of Sub and Mid-bass with moderately bassy IEMs. Bass is not overpowering at all and a tight, punchy lower frequency part can be achieved using iBasso DC03. The quantity is sufficient for any bass lover yet the quality of the bass is here needs appreciation. Speed is moderately fast and decay is good. With my Fearless audio Crystal Pearl; songs like ‘Instant Crush’ by Daft Punk sounding extremely good, the sub-bass rumble is there and I am getting an overall well-controlled presentation.

The implementation of a DAC chip inside a device determines the sound most of the time. But different DAC chip also has its own sound signature and if you ask me, what I like the most from Cirrus Logic’s sound then I would say the musicality of the Mids. Now some DAC chips have either very dry or warm midrange but in Cirrus Logic chips the midrange is very natural and sweet sounding.

DC03 is no exception here. With iBasso DC03 I am getting a rich midrange with above the average resolution. No particular emphasis on either Upper-Mids or Lower-Mids so both male and female vocals sounding smooth and natural. The timbre is good and the separation between vocals and instruments is also good. Acoustic instruments sounding very good especially pianos, violins, guitars, & saxophones. For example, songs like ‘Your Latest Trick’ by Dire Straits sounding fantastic.

I have used DACs with Cirrus Logic CS43131 before and in those devices, the higher frequency part is always not so well extended. In iBasso DC03 the story is different. DC03’s higher frequency part is well extended yet not harsh. With properly mastered tracks and balanced sounding IEMs, you can enjoy the airy and spacious highs. Maybe the micro details are not so refined but enough to please a treble lover. While listening to the entire album ‘Thriller’ by Michael Jackson, I never felt DC03 lacking in the treble part.

The added soundstage of iBasso DC03 is wide, Imaging is also above average. With well-mastered tracks like ‘Family Man (Extended Vocal Remix)’ by Fleetwood Mac the added soundstage is wide but not too wide to make it holographic. Overall the soundstage and imaging are satisfactory.

There are so many such dongle DACs in the market now and comparing them with each other is a difficult job. Still, I am trying to compare iBasso DC03 with its predecessor DC02 and another DAC from Shanling i.e. UA1.

I don’t have DC02 now at the moment so I am comparing DC03 with DC02 from my memory. Design and build wise both have similarities but DC03 feels solid, well build, and stylish. DC03 is more efficient, more powerful than DC02. Sound wise in DC03 the tonal balance is better in comparison with DC02. Less warmth in DC03 and better midrange too. Maybe the soundstage is better in DC02 but from the aspect of musicality, the iBasso DC03 is superior. Both of them are similarly capable of rendering a good amount of details and air in the treble part.

This is the toughest part of this review. I am getting multiple requests from my readers, to tell them which one is better between these two DACs. Sadly I don’t have any clear answer for them. I have both the devices in my hand and both of them are good. Using them side by side and pointing out the difference is quite difficult. Still, there is something which I would like to mention here. Please note that these differences are not huge.

I like iBasso products for their unique design and uncompromised sound. They may have not a huge lineup of products, but every product from their brand worth its price and shows their mastery over sound tuning. I am buying iBasso products for a long time and never felt disappointed. iBasso DC03 is also another good purchase for me. I like listening to a lot of blues, Jazz and with iBasso DC03 the overall listening experience is very good. No doubt iBasso DC03 worth its value, and possibly the best implementation of Cirrus Logic CS43131 so far.