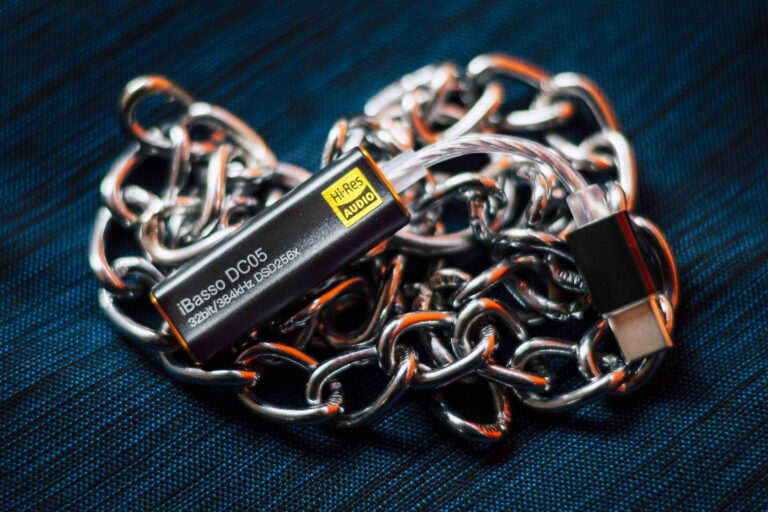 Many of you may haven’t known that iBasso DC01 was the first product that started ‘Dongle Madness’. Before DC01 no one had ever believed that high-power DAC chips like AKM4490 could be packed inside such tiny shells. Things have changed a lot now and almost every audio brand has its High-Res dongles in the market. iBasso had also released their more polished successor (DC03 & DC04) of DC01 & DC02. After the success of DC03; which I reviewed earlier, a more powerful and versatile updated single-ended dongle is here from iBasso, which is DC05. Thankfully it’s now in my hands, so let’s do an iBasso DC05 review.

Please note that the unit has been sent to me by iBasso for this review. So a big thanks to iBasso.

What’s in the Box?

iBasso DC05 comes in a small hard plastic see-through box. The box is strong enough to keep the device safe and looks good too. Inside the box, the device, adapter & user Manual has been securely kept using dense foam. Now the unboxing experience is very similar to iBasso’s previous DC03 and as usual, the presentation is simple and elegant this time too.

Design and build quality are no doubt good this time too. DC05 looks identical to iBasso’s previous DC03 model though, but this time DC05 comes in either a matte green or matte black finish. One thing is clear iBasso is not doing any experiments on the design side and only using previously proven designs. So far the design and build quality is good, so I have no objection. DC05 weighs only 9 grams but feels solid in hand.

iBasso DC05 also has a status indicator light near the 3.5mm port. It lights up Red after plugging and remains static after on. Once you start playing music files, the led indicator changes color according to the file playing over DC05. For example Green for PCM files, Magenta for MQA, and Blue for DSD.

No driver or specific settings are required for iBasso DC05 to work with Android and IOS devices (with Type-C ports).But for Windows OS, iBasso has a dedicated driver which you can install to enjoy the ASIO drivers in programs like Foobar2000.

The output power of iBasso DC05 is 1.73V @ 32 Ω and 2Vrms @300Ω load, which is high and suitable for IEMs and not-so-demanding headphones. DC05 can easily handle 150-200 Ω headphones too. Almost zero background noise while using moderately sensitive IEMs.

iBasso DC05 supports internal hardware volume control via applications like USB audio player pro and iBasso UAC. But don’t use both apps simultaneously because they are creating conflict with each other. Sadly DC05 doesn’t have a Mic and in-line control support.

iBasso DC05 is a very well-rounded and almost balanced-sounding DAC. Still being balanced sounding, a bit of emphasis on the lower frequency is present. In the entire DC series’ journey, DC05 is the most mature and refined-sounding DAC from iBasso. DC05 presents a crystal clear sound with a natural timbre. Though DC05 has a pair of ES9219C inside but the sound signature is not at all like my other ESS-based dongle DACs.

The lower frequency part of iBasso DC05 is a bit boosted but not too much. DC05’s lower frequency part is clean, fast, textured, and well-extended. IEMs/Headphones with weak bass response can benefit from DC05. Songs like Somebody’s Watching Me by Rockwell  sound extraordinary with DC05. The punch, rumble, and texture became more prominent with DC05 and whenever I pair it with my IEMs.

The Midrange with DC05 is clean, crisp, and open sounding. Not too sharp not too smooth, totally perfect. Neither boosted nor recessed, perfectly natural. The warmth of the vocals may not be there but not at all dry in most of the tracks. A song like Come Rain Or Come Shine by B. B. King doesn’t have the warmth which I like most but is still quite acceptable. Female vocals like Amber Rubarth in Wildflowers in the Graveyard sound open and airy with DC05.

iBasso DC05’s higher frequency part is well controlled and very well extended. Neither rolled off not sharp fatiguing. iBasso successfully managed to tame the ESS glare maintaining the air and shimmer in the treble part. But better not to pair DC05 with bright IEMs, as it may scratch the non-fatiguing line of a listener. The added soundstage is limited and not adding much to the existing stage of my gears.

The best thing about iBasso’s DC lineup is, iBasso didn’t try to experiment too much with its new models. Instead, they refined the design and sound from every aspect possible. Every time a new DC series DAC is coming and it sounds more and more polished than the previous one. In the current scenario, there is no shortage of dongles in the market but finding an affordable, fully capable, and truly refined-sounding DAC is tough. And iBasso DC05 hits that slot perfectly. If anyone wants a perfectly sounding, MQA-capable DAC under 100$, iBasso DC05 could be the only option out there.